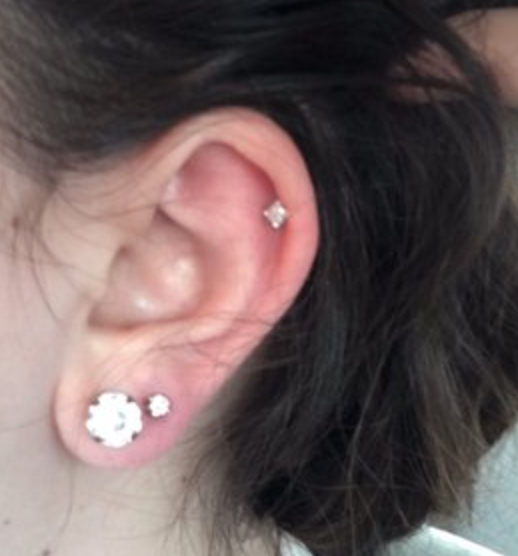 After waiting over a year to get my cartilage and 2nd lobe pierced I finally got it done! I went to the store at regency and I couldn’t be any happier. The people there were very nice and were able to answer all of my questions!!

I had a great experience with Wesley the piercer-she’s fantastic!  I was there to switch out some of my existing cartilage jewelry and get 1 new cartilage piercing.  Wesley was super patient, offered great advice on what jewelry to place where, and then made sure the jewelry fit perfectly.

The piercing itself was quick and the placement was exactly what I wanted.  And to top things off, I had previously purchased a piece of jewelry but was given a slightly different piece than I wanted, and she replaced it for me at no charge.

The jewelry selection here is really unparalleled, and they carry Neometal threadless jewelry, which is top notch.  I highly recommend River City Tattoo, and Wesley in particular, for all your piercing and jewelry needs.

Adam Marton is an amazing artist!!  Thank you Adam for creating such a beautiful message on my leg!!!’ Go see Adam and get Inked!!!

I had been wanting my nose pierced for years but was afraid of the pain. A couple people recommended River City & I’m so happy I went. The piercer at the Boulevard location was super helpful, thorough and pleasant – she explained every step of the process before she started, as well as how to care for my new piercing. The selection of jewelry was amazing, although they were sold out of my first choice. And – it didn’t even hurt! Just a bit of a pinch & a little tenderness that day.

I went here with my two best friends and mom on my 18th birthday to get my middle cartilage (midway) pierced. (After a lot of research, I learned that going to a tattoo shop was the best idea for a cartilage piercing, because they are better trained than Claire’s and use a needle as opposed to the gun).

I walked in, told them what I wanted, and filled out some forms. They asked for my id and copied it. I waited for the piercer to get back from dinner, then he took me and my entourage back into a private room.

He cleaned my ear, and then put 3 dots on my ear and asked me which I liked best. I chose one and he cleaned my ear again. He told me to take a deep breath in and let it out. I guess I was hyperventilating a little because he told me to try again, and then he pierced it. It was painful when the needle went through (obviously) but it didn’t hurt later the same day. It hurt the day after, and continued to hurt for a few days.

He told me to come back in 3 weeks so he could check it and see how it was healing. I did, and he said that it looked great.

It’s been about 5 and a half weeks and it doesn’t hurt at all anymore. I am so impressed with them!! They were really nice and did not care at all that I brought 3 people with me. Obviously, I have no experience with the tattoo artists but I would definitely recommend it for piercing!!!!

Also, I’m not sure if this is relevant, but the piercer did not allow videos of the piercing, only pictures.

The staff here was informative and helpful. I needed a new piece of jewelry for an existing piercing and they were so helpful I decided to come back the next day and have my septum pierced. They eased my anxiety and made the process smooth and as painless as it could be, they helped assuage all my fears. I am excited to go back and stretch to the next gauge!

Walked in here kind of late last night (N Blvd location) to get some piercings done.  The place is deceptively huge!  They have walls and walls of body jewelry to look at, which is fun.  I filled out the waiver forms, picked out my jewelry, and after a small wait, I met my piercer James.  He brought me to a private room (yay privacy!) and we talked in detail about what I wanted done, how I wanted the end result to look, etc.  For the cartilage piercing, he carefully drew cross-hatches on my ear so I could decide the exact location.  I took forever deciding, but he was super patient and nice, and wanted to make sure I was going to be happy with the placement.  The whole piercing process took little to no time at all.  There wasn’t even any pain, except for an unexpected pinch when he was tapering my left lobe, which had closed up.

I am SO EXCITED with the final result!  It looks perfect and exactly how I wanted it.  James did an awesome job 🙂

I went to River City for my first tattoo and my expectations were exceeded at every turn. I did a lot of research of shops and artists before I chose where to go and River City seemed like the best fit and I was right. Everyone there was really friendly and the atmosphere was very relaxing. I only had a rough idea of what I wanted and I had Charlie design something for me and it came out amazing. The entire process was very easy and it made me feel very at ease and I am extremely happy with how everything turned out. I definitely plan to come back to get more done there very soon.

Went there to get tattooed and had such friendly customer service. Charlie tattooed me and did an awesome job. It was a very reasonable price for the great work he did. Will definitely go back again! Also my mother got pierced there and said they were very professional and had a great experience!

I received my sleeve tattoo back in 2012 and I’m still receiving compliments! I already had a skull with smoke and the artist finished it up by adding more and blended it all in. It’s most def the most talked about piece out of all my tattoos. Service was friendly and wasn’t rushed. We took breaks during both trips there (total of 6hrs).

Friendly folks. Excellent at piercing. I’d totally recommend them! I walked in and didn’t have to wait either 🙂

My first tattoo experience in Richmond & I’m happy to report it was without a doubt 5 stars. Got a small tattoo (my 7th) and I plan on heading back for my half sleeve. Great customer service, gorgeous shop, very comfortable atmosphere. Clean, organized, and fun with an ATM just in case you need it (they accept credit cards but cash is preferred). I’ve been in tattoo shops across the country and around the world, and I highly recommend River City Tattoo to anybody in the area looking for quality work and a fantastic shop. Ask for Charlie!

I got my tattoo done here yesterday. Adam did it and I really like how It turned out. I brought in a picture of the shamrock that I wanted in my food and he sketched it pretty perfectly from the image on my cellphone. He helped me decide where on my foot I wanted to put it and he charged me a pretty reasonable price for what I wanted. I have another tattoo that I want to add to and I will most likely be returning here for that.

I have been going to River City for my tattoo or piercing needs for the last 4 years exclusively. I have been tattooed by Mike H. once, Jason T. excessively, and Adam M. twice! The work is exceptional and it is amazing to have the connection and the understanding with an artist that I have had with Jason and Adam! True artists who truly care about the design and the lasting art they are creating!  Clean, professional, great artists and proud of the job they do! Highly recommend in the RVA region!!!

I went in and talked with James and he was the most knowledgeable, friendly, professional and fun to talk to out of all the piercers I have ever been to. I got my septum pierced and it was a great experience. Very clean and organized as well. I even got to use a coupon and saved 50%.

My friend and I recently went to River City to get our noses pierced.  We called in advance to make sure they had time and the man who answered was really nice and said they would take us right away.  When we arrived, they took us in immediately  The tattoo shop was extremely nice and clean and the staff are wonderful.  James was our piercer and I cannot describe how awesome he was.  He was so extremely knowledgeable that my friend actually asked him if he was pre-med.  He was so nice and explained everything he was doing as he was doing it.  He was so passionate in his work and he did a FANTASTIC job! The shop also had an incredible selection of jewelry and the whole atmosphere was just really nice.  The prices were also really good!

I went into river city tattoo on the boulevard to get a vch piercing. I was introduced to Luna who would be my piercer. She was super friendly and answered any questions I had. She also made me feel very comfortable and put me at ease. She did an awesome job and it was over in an instant. I would recommend Luna for any of your piercing needs.

I came down from D.C. for work and needed to get a piercing for my navel as mine had fallen out a few days prior to my trip.  I went into this place and it was huge!  There were a ton of piercing options, several people working there, and many private rooms to have your piercing/tattooing needs taken care of.  The person who helped me was incredibly professional and kind (which was nice because I am squeamish/nervous).  He put the piercing in for me for free.  Everything was clean and professional.  I’m so glad I stopped in and would highly recommend it to anyone.